CHARLES MCPHERSON IN CONCERT – Last Thursday, the audience at Bimhuis, Amsterdam was delighted by the simultaneously burning and sophisticated message of alto saxophonist Charles McPherson (78), one of the prime torchbearers of the bop tradition. 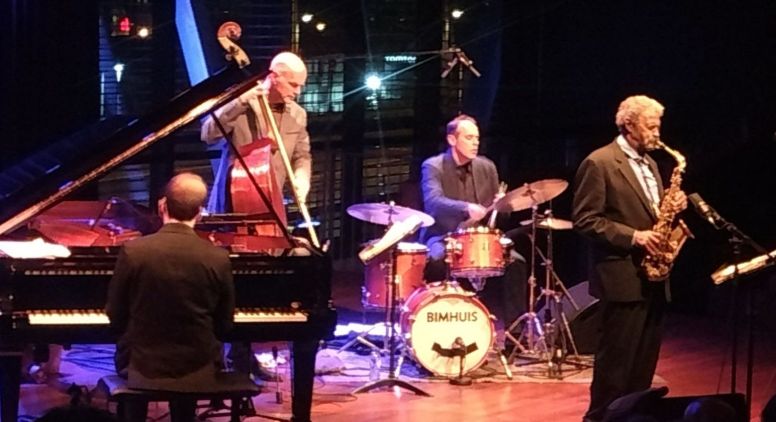 McPherson’s last album, 2015’s excellent The Journey, suggested that the veteran saxophonist wasn’t planning to rest on his laurels. At the Bimhuis, the Joplin, Missouri-born saxophonist, who has been associated with, among others, Charles Mingus and Barry Harris, made abundantly clear that he remains a force to be reckoned with in a live setting as well. In great shape and eager as a young lion, McPherson presented a program of tunes like What Is This Thing Called Love, Lester Leaps In, Off Minor and original compositions by McPherson such as Reflections On An Election.

It’s memorable to be witnessing the real deal, the kind of phrasing, timing and storytelling so typical for the bop and hard bop era. McPherson conjures up vivid images of Charlie Parker, Sonny Stitt, Sonny Criss while at the same time delivering supple lines, fluent phrases, blood-red tag endings and humorous asides all his own, topped off with an edgy sound reminding us that his brand of jazz came from the kind of joints where, with the regularity of a clock, a burly whisky drinker is arguing at the bar with a dishwater blonde whose mascara has been steadily running down from her crow’s feet to the decorated birthmark on her left cheek. Meanwhile, the viper is trying to trade his junk.

McPherson’s forceful wail and unexpected excursions in the high register of the alto point out that the saxophonist, like all old-school cats, could in fact do without amplification; he carries the band, particularly noticeable during his rendition of Nature Boy, a beautiful melody and the most surprising pick of the evening. The controlled fury of his lines at breakneck speeds is easily taken for granted. His lines in themselves are sustained efforts of literal storytelling: they comprise a reflection of his personality while also following a logical, musical course. This is most evident during the ballad Embraceable You, the vehicle for some of Charlie Parker’s most enduring statements and a canvas too for McPherson’s breathtaking figures that slowly but surely gain momentum.

The band may have been somewhat out of habit, since bassist Daryll Hall, involved in an unfortunate accident, had to be replaced at short notice by Dutchman Joris Teepe. Occasionally, one of them is waving with a piece of music paper. However, the members of McPherson’s group provide a bed of roses for McPherson’s resolute game of bop, blues and ballads. Like the inclusion of Nature Boy, another surprise was in stock: one would expect some tough customers as accompanists of a monster player like McPherson but instead the trio exhibites an unusual, but far from unbearable, lightness of being. The distinguished Teepe is pure silkiness, pianist Alberto Palau’s touch is restrained and drummer Stephen Keogh’s intricate shadings and subtle rhythmic variations are reminiscent of the great Alan Dawson’s style. Not so much hard but subtle swing. It has its charm, and the boss alto on this particular Bimhuis meeting, Charles McPherson, is very charming as well, conversating more intimately and wittily with the audience as the evening progresses.