Lots of great Hanks out there. One of the lesser-know Hanks, tenor saxophonist Hank Bagby, delivered a first-rate hard bop album in 1964, Opus One. 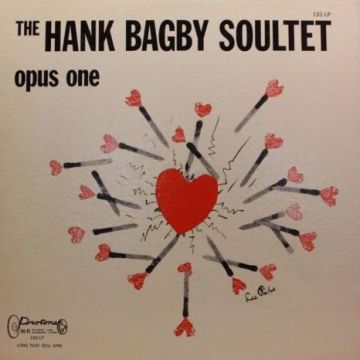 Side A:
Dee Dee
The Great Wall
Soul Sonnet
Side B:
Kiss Me Quigley
Iborian
Algerian Suite


Thanks Matt Block from Chicago, major league hard and post-bop collector, for putting Flophouse on to The Hank Bagby Soultet’s Opus One through the grapevine of the evil but occasionally very pleasant world wide web. There’s always more hardbop out there than expected. Live and learn. Die and reincarnate as the insect from Kafka’s Die Verwandlung, crawl on the pavement of Sunset Boulevard and get squashed on the star tile of Hugh Hefner before, to cite Kinky Friedman, you were able to bug out for the dugout. Come back again as Mahatma Gandhi, slip into suit and tie and invest in big data. Be ashamed of yourself. Nothing to be ashamed of if you’re Hank Bagby. Hank Bagby is ok. But is Opus One an album we should be ashamed of having ignored for so long? No not exactly. It’s not a milestone of mainstream jazz. But then again it’s about time it gets the attention it very well deserves.

The pulse of the album is pretty contagious, Jazz Messengers-like in spots. Moreover, both Dee Dee and The Great Wall wouldn’t have been out of place on Art Blakey & The Jazz Messengers albums. Perhaps most striking, the typical hard bop format of quintet line-up featuring sax and trumpet, blues-based repertoire and medium tempos is strengthened by a number of exotic flavors, the melodies of Soul Sonnet and Iborian (Nairobi spelled backwards) in particular.

Obviously, Bagby was a good writer. As a tenor saxophone player, his big hard tenor sound is exciting but his lines have a tendency to somehow pass by unnoticed. Trumpeter Chuck Foster is more impressive. His bright tone and sparkling lines lift up the fresh set of tunes. Even better is pianist Dave MacKay, who provides pulsating backing with a combination of strong-willed chords and pesky lines. As a soloist, without exactly imitating them, he’s somewhere between McCoy Tyner and Horace Silver. Not a bad place to hang around.

Bagby started as a singer in Denver in the 40s, then worked as a saxophonist on the West Coast in the 50s with Kenny Drew, Leo Wright, Joe Maini, Elmo Hope, Dexter Gordon and Harold Land. Opus One is his only album as a leader. Currently going for 400$ on Discogs. Mind if I pass? Luckily, there’s also a CD that was released by Jazzhus in 2012. And the full album is on YouTube. Listen here.

Clarence Henry Bagby passed away in 1993.