Singer Marjorie Barnes couldn’t have asked for a better supporting outfit than Equinox. 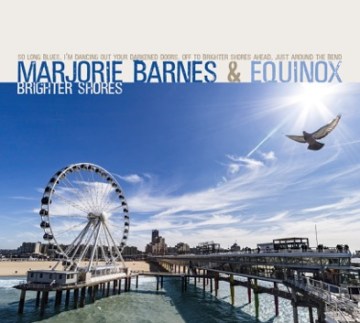 Tracks:
Let’s Dance
Brighter Shores
Come What May
Throw It Away
Lady Be Good
Little Girl Blue
E.V.’s Berlin Bounce
I’m Glad There’s You
Round And Round
Where And When
Here’s To Life


The American singer first came to The Netherlands in 1975 as a member of soul group The Fifth Dimension and subsequently, while performing as a jazz and Broadway performer around the globe to high acclaim, spent half a lifetime teaching at the conservatories of Hilversum and The Hague. On Brighter Shores, Barnes is supported by guitarist Dan Nicholas, tenor saxophonist Simon Rigter, pianist Bob Wijnen, bassist Steven Zwanink and drummer Marcel Serierse. The self-proclaimed keepers of the flame, products of the Dutch mainstream jazz city #1, The Hague, provide a resonant and occasionally very hardboppish canvas for the classy strokes of Barnes.

For all Brighter Shores’ radio-friendly content, Barnes remains the antithesis of frumpy singing, a survivor-of-the-fittest that won’t shy away frow wailing, groaning or bending notes if a tune calls for streetwise sparks to be added to its smoothly operating flow. The album’s opening tune, a hard-swinging version of David Bowie’s Let’s Dance, is a case in point. Nicholas, guitarist, bandleader, arranger and lyricist, builds a sparkling, coherent story in the self-penned title track, Brighter Shores. It’s one of three original Nicholas tunes on the album. His arrangements are uplifting, hip, the driving horn sections of Let’s Dance, (the instrumental) E.V.’s Berlin Bounce and the excellent build-up from the kinetic bass intro to the down-home blues vibe of Abbey Lincoln’s Throw It Away being especially enticing. Simon Rigter’s tenor sax sound and the voice of Barnes are like brother and sister. Rodger & Hart’s Where Or When has Rigter snake-charming Barnes from a shopworn nightclub, the one where a corny thank-you-for-smoking-cardboard-sign hangs loosely on a nail behind the bar.

Thankful and thoughtful feelings abound in Here’s To Life. Marjorie Barnes sings like someone who’s been determined to overcome hard times and cherish the good times, ‘has no complaints, no regrets, I still believe in chasing dreams and playing bets, I learned that all you give is all you get, so give it all you got, I’ve had my share, I drank my fill and even though I’m satisfied, I’m hungry still to see what’s down another road, beyond the hill and do it all over again…’.

Come What May expresses similar emotions. Interestingly, before Allee Willis’ song became a hit by Patti LaBelle in 1979, Marjorie Barnes was scouted by Leon Ware to record the tune. Aptly, the lush arrangements of Dan Nicholas are a nod to the arranging job of songwriter and performer Leon Ware for Marvin Gaye’s I Want You, the added, sweet-tart interlude functioning as the icing on the soul-infused cake. Come What May boasts a guest appearance from trumpeter Ruud Breuls, who puts his cushion-soft sound and melodic style to superb use and blends sweetly with Simon Rigter, his longtime hard bop companion, who appears on flute. So the inclusion of Breuls makes Equinox a sextet of outstanding compadres of the experienced leading lady, Marjornie Barnes.

Listen to the album sampler here.