For his third and final release on Blue Note, tenor saxophonist Don Wilkerson teamed up with a cookin’ crew that suits his style to a T. His debut on Riverside in 1960, The Texas Twister, hadn’t quite fulfilled his potential. His Blue Note-sessions were elevating and more successful. Shoutin’ maintains the enamouring blend of r&b and jazz of his previous Blue Note recordings, Elder Don and Preach Brother!. Not in the possession of a big sound, Wilkerson instead relies on a lilting tone and uplifting, bouncy phrases. 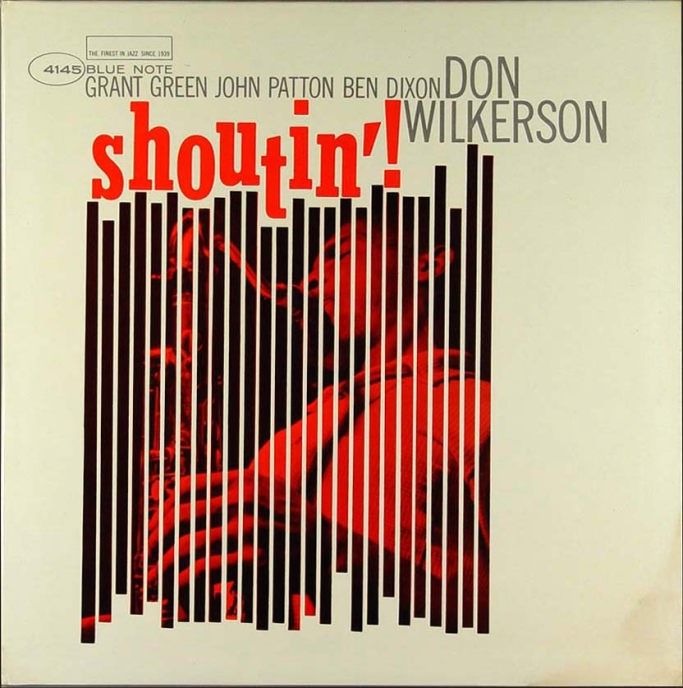 Side A:
Movin’ Out
Cookin’ With Clarence
Easy Living
Side B:
Happy Johnny
Blues For J
Sweet Cake


Wilkerson was born in Louisiana and had spent a big part of his life in Texas. He played with rhythm and blues artists Amos Milburn and Charles Brown, as well as jazz luminaries Sonny Clark, Dexter Gordon and Wardell Gray. He was part of the early Ray Charles band and functioned as featured soloist on classic hits such as I Got A Woman and Halleluja I Love Her So. So Wilkerson gained a bag of priceless experience.

It isn’t hard to imagine what those men presumably liked in Wilkerson. His alluring tone and candid delivery are at the heart of the medium-tempo Movin’ Out. Coincidentally, it has the structure and bounce of the early Ray Charles tunes; and their fresh elan as well. Wilkerson also displays subtle swing, which he employs to great effect in the ‘breathy’ ballad Easy Living. In it, the influence on Wilkerson’s style that shines through most prominently is that of Paul Gonsalves.

Cookin’ With Clarence is an example of this group’s solid interplay. These men share a lot of r&b experience. John Patton and Ben Dixon both had been part of Lloyd Price’s popular rhythm & blues orchestra. Grant Green played r&b and blues during the early part of his career in St. Louis, notably with Jimmy Forrest. The tune is an uptempo showcase for all involved, stimulated considerably by the climactic sections at the end of the ensemble choruses, that catapult the soloists into action. Don Wilkerson is swift as a rattlesnake. Grant Green is a spirited presence. His phrasing is fluent and his strumming confident and aggressive. John Patton’s lines are crunchy and fiery, inspired by the unisono background figures of Wilkerson and Green. Meanwhile, Ben Dixon’s probing rolls and cymbal crashes stoke up the fire. Both Movin’ Out and Cookin’ With Clarence are Wilkerson originals.

The modal-type tune Happy Johnny is also a Wilkerson composition. The variation in Wilkerson’s solo is more on the rhythmic than melodic side. Blues For J is a slow blues of the afterhours-kind, relaxed but driving. Sweet Cake, a tune from Wilkerson’s Louisiana friend Edward Frank, is a shuffle that strolls along nicely and includes a dynamic John Patton solo.

Wilkerson would continue to perform in the r&b field in the sixties and seventies. There are few, if any, players like Wilkerson today. The type of musician in the mixed zone of r&b and jazz, that matured after traveling the route of the chitlin’ circuit: the black neighbourhood music scene of local bars and small clubs. Nowadays those kind of musical breeding grounds are largely non-existent. Hence the virtual absence of contemporary saxophonists in the straighforward but sophisticated vein. Therefore, Shoutin’, is an example of a bygone era. It may be history, but it sounds lively as hell.