A big band record from Art Blakey – drummer and bandleader who upped the ante for small jazz combo’s from the mid-fifties onwards – might’ve looked like an unorthodox move in 1957. But Blakey possessed a lot of big band experience, having played in the groups of Fletcher Henderson, Lucky Millinder and Billy Eckstine in the fourties. The Eckstine band was particularly renowned as a playground for the future bebop innovators, among them Charlie Parker, Dizzy Gillespie, Dexter Gordon and Fats Navarro. What Big Band lacks in the subtlety of arrangements is duly compensated by Blakey’s spirited delivery and the prescence of trumpeter Donald Byrd and tenor saxophonist John Coltrane. 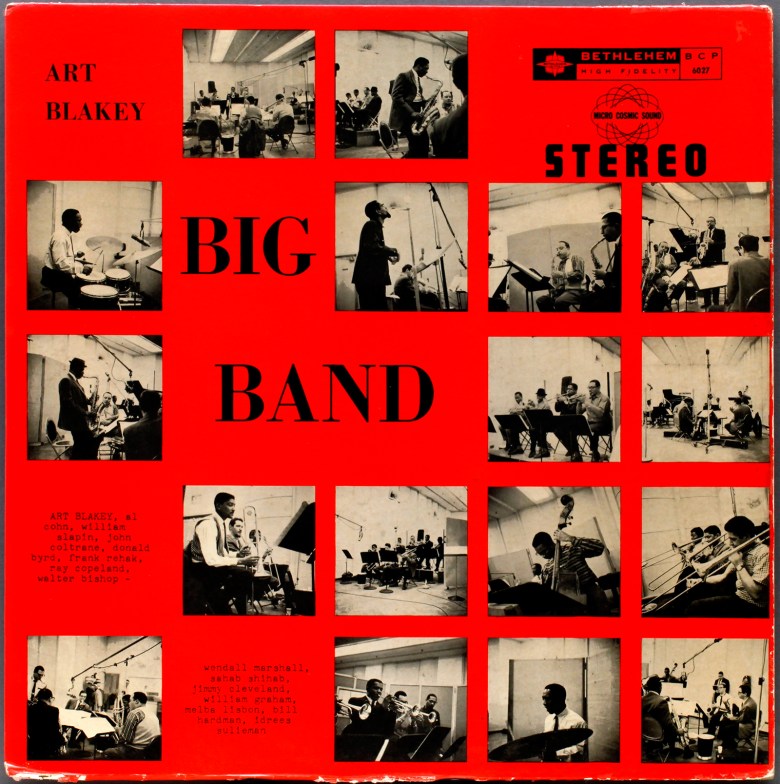 Side A:
Midriff
Ain’t Life Grand
Tippin’
Pristine
Side B:
El Toro Valiente
The Kiss Of No Return
Last Date
The Outer World


Big Band represents the end of a string of recordings on different labels before Blakey turned in the iconic Moanin’ and came home at Blue Note headquarters for his second fruitful period. 1957 was the most productive recording period in Blakey’s career, ending on an impressive figure of eleven releases. (and we’re not even counting a session for Cadet – Tough! – which was released in 1966 and this album, which was released a couple of months later in 1958)

Big Band is an intriguing album. A diversity of players have room to solo or turn in a couple of short bits, which keeps the listener on its toes. Chief among that batch of sidemen are John Coltrane and Donald Byrd. Byrd delivers one song – Tippin’ – and a string of uplifting statements. Then there’s ‘Trane. For one thing, Coltrane has seldom recorded with Art Blakey. They played on Thelonious Monk’s Monk’s Music and Johnny Griffin’s A Blowing Session, both in 1957. Therefore, Big Band is an interesting record for Coltrane and/or Blakey-geeks. You might as well count me in.

It wasn’t only a rarity to hear Blakey in a big band context, for Coltrane it also represented a step into new ‘recording’ territory. He tackles it with characteristic confidence and passion. His soaring solo in opening tune Midriff, overflowing with ideas and an abundance of double time scales, grabs you by the throat. It’s a reminder of the ever-developing late fifties Coltrane, creating a stir, controversy and boundless admiration, all brewing in one big steaming pot of stew. Just as Donald Byrd, Coltrane turns in a composition for quintet. Pristine resembles Moment’s Notice from Coltrane’s classic album Blue Train; the first two notes are identical and the chord structure partly runs along the same lines. A peculiar incident? Presumably not. Blue Train was recorded in the same period as Big Band, on September 15, 1957, to be precise. Big Band was recorded approximately eight weeks later. Pristine isn’t as forceful as Moment’s Notice, but it’s a fine composition and performance.

Pristine and Tippin’ are two quintet tunes, yet don’t sound out of place between big band festivities. They sound grand as well. On the whole, Blakey employs the same dexterous method for either big band of small combo playing. He’s more involved with a shifting of accents than changing his style entirely. Midriff kicks ass, Basie-style. Blakey introduces certain tunes with the drummer’s typical rumble and spurs on his crew with fatter-than-fat rolls or a well placed cymbal crash. A number of compositions include heavy breaks, sometimes combined with short, stabbing horn arrangements. It worked on side A’s Ain’t Life Grand, but being repeated on El Toro Valiente as well as The Outer World, that game becomes a bit repetitious. Those relatively crude arrangements represent the least exciting side of Big Band.

Blakey’s sidemen Donald Byrd, Frank Rehak and arranger Melba Liston expressed their joy of playing with Blakey in a big band context and would’ve liked to see the inimitable drummer and bandleader continue these procedures. So what was Art Blakey’s view on the subject? Adamant, and down-to-earth as usual, he expressed himself as follows:

“In small combo work, you’re free, you get to play. In a big band, nobody has freedom. And the drummer has to stay right with the rhythm section; he can’t leave. There are kicks though if you have the time to build a big band. The guys have to grow together. What makes a good big band drummer? Aside from keeping time, all you can do is try to interpret the arrangements and fill in the holes.”

Thus, it was impropable that a future in big band drumming would materialize. Indeed, it didn’t. We’re just glad to make do with Big Band, with Blakey filling in the holes in his incomparable manner, adroitly, furiously.