No holds barred on debut album by heavy Hammond and guitar rockers Boost!. 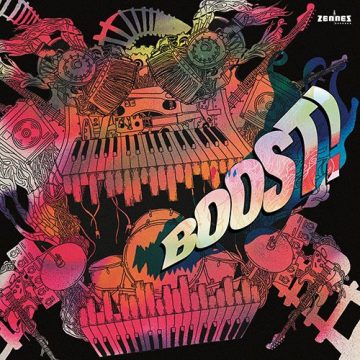 Very Almost Commercial
Lucky Like Lola Leavin’
The Godmother
Maggie’s Theme
Outlaw
One Moment In Time
Own It!
Presence Of Absence


Rob Mostert has been a Hammond organ staple on the (Dutch) scene for years and his 2010 recording at Rudy van Gelder’s studio featuring Houston Person gives you an idea about his straight-ahead style. He was seen on national tv recently, battling with fellow organists on prime time and throwing a bit of Green Onions at them. He’s stepping out of his comfort zone and hooked up with Jerôme Hol, ace guitarist that played with Billy Cobham and Lonnie Smith among others. Their drummer of choice is Erik Kooger, Hol’s colleague from the band of famed Dutch tenor saxophonist Hans Dulfer.

They are Boost! and energetic like three rugby players that hurl themselves into the scrimmage. Lurid riffs mingle with twisted and booming Hammond sounds on funk rock songs like Own It! and Lucky Like Lola Leavin’ and ballads as Presence Of Absence. Psychedelica enters the equation with The Godmother, which features typically virtuosic hard rock skills from Jerôme Hol, talented heir to Adje van den Berg en Eddie van Halen. Impressive, though personally I like him better when he’s playing fewer notes and in a more bluesy vein as in Maggie’s Theme, which also features excellent jazz-tinged statements by Mostert.

Boost!’s themes may not excel in the originality department but no doubt please crowds. Having said that, Outlaw is something else, starting out as a synth-y mood piece that would suffice as the soundtrack to a suspenseful John Carpenter movie scene and developing into booming prog rock. Mostert’s variation of sound is very attractive.

The irony of Very Almost Commercial isn’t lost upon us, as Boost!’s simpatico release aims at FM frequencies but not without healthy doses of top-notch musicianship. Almost whimsy but not quite and there still is some stretch in the band’s recipe.