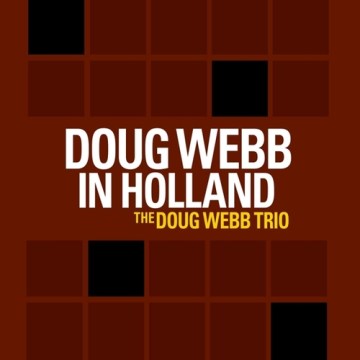 254W. 82rd Street
Subconscious-Lee
Delilah
Invitation
Alexico
Ornithology
Spring Can Really Hang You Up The Most
These Things
Get Out Of Town
Lunar Eclipse


Fashions, hypes, Indian ropes and hoo-ha about spiritual jazz drift past the consciousness of players like tenor saxophonist and woodwind player Doug Webb. That is, of course, because the Angeleno undoubtedly understands that to label jazz as spiritual is a contradiction in terms. By nature, jazz of any kind is a matter of the spirit. And it is, foremost, because Webb has for decades been steadily refining his art of mainstream jazz, undisturbed and very prolifically.

Webb played with Horace Silver, Freddie Hubbard, Shelly Manne, Bill Holman and Stanley Clarke. He’s a real pro that was part of the Doc Severinsen Tonight Show band and is an omnipresent contributor to pop music and Hollywood soundtracks. Webb is a passionate woodwind specialist that plays, among others, piccolo, soprillo, saxello, sarrusophone and pretty much any flute with exotic name and characteristic he can put his hands on. As a tenor saxophonist, Webb contributes a fresh approach to the Coltrane tradition.

I coincidentally saw Webb perform at a session in Pavlov, The Hague in November, 2018 that included pianist Rein de Graaff, bassist Marius Beets and drummer Eric Ineke. That night Webb explained that before returning to L.A. he would collect a contra alto flute and subcontra bass flute from an acclaimed flute maker in the little town of Grollo in the province of Drenthe. The day after the gig, Webb, Beets and Ineke went into the studio of Beets in Zeist to record Doug Webb In Holland.

It turned out to be a rewarding session of piano-less trio jazz. Webb selected Lee Konitz’ Subconscious-Lee, Victor Young’s Delilah, Kaper/Webster’s Invitation, Charlie Parker/Benny Harris’ Ornitology, Wolf/Landesman’s Spring Can Really Hang You Up The Most, Cole Porter’s Get Out Of Town and contributed four original compositions: lovely swinger 254W. 82nd Street, nifty boogaloo blues Alexico, All The Things You Are-variation These Things and Lunar Eclipse, which is based on Webb’s earlier tune Lunar – which was based on Solar, the composition that Miles Davis reportedly nicked from guitarist Chuck Wayne.

Rarely short of ideas, with the structured control of rhythm and harmony that brings to mind Warne Marsh, Webb revels in the company of two great companions. Ineke’s ability to translate his wealth of experience and massive knowledge of jazz history to sensitive and alert accompaniment is nonpareil. Beets’ choices of notes are spot-on and he takes a lot of melodic turns from low to upper register and vice versa. As a result, Delilah, featuring Beets on acoustic bass instead of double bass and Ineke with mallets, is a cushion-soft gem, beautified by Webb’s almost childlike lyricism. The mix of Webb’s witty statements and Ineke’s hard-swinging brushes of Ornitology and the probing, intriguing phrases – and paraphrases – that Webb spins on the gulf of ride cymbal and pulsing bass during These Things constitute but a few of In Holland’s highlights.

Webb has a lot of experience of playing and recording in the piano-less format. It worked out beautifully. Webb fills the unfolding space that is created by the absence of the piano with inexhaustible strings of lines. Here and there, a gravely microtone or valve effect is thrown in the equation, measured dots on the sentences of Webb’s concise stories. Webb has plenty of muscle but demonstrates the masterly wisdom of restraint. His layered poetry makes In Holland a serene experience, as if you’re listening to falling autumn leaves. Ineke and Beets sweep up the rustling leaves, gather the beautiful copies and arrange a pretty bouquet.