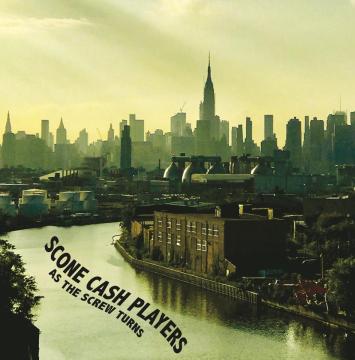 
Adam Scone came up in the late 90s and has been much in demand since. He played with Lou Donaldson, George Braith, Ben Dixon, Melvin Sparks, Lee Fields, Charles Bradley and Naomi Shelton. A specialist of gritty organ grooves, Scone assisted the front-running funk jazz outfit Sugerman Three as well as Hot Pants, The Macktet and J.J. Grey & Mofro.

Scone released five albums, partly under the monicker Scone Cash Players. His latest offering (also on wax) involves a sly funk groove with myriad treats: fantastic vocal cameos by singers Naomi Shelton, Jason Joshua and John Dokes, meaty and sharp arrangements and, foremost, the no-holds-barred organ playing of Adam Scone, who possesses the trance-inducing storytelling ability that we’ve come to appreciate so much in masters like Lonnie Smith and the late Charles Earland. Furthermore, Scone tastefully carries a song with different tonal directions and various degrees of tension and release.

Care to produce a neo-blaxploitation flic? Here’s your soundtrack. That’s an obvious reference. But to be sure, the calibre of musicianship on the best of the classic blaxploit albums couldn’t be overestimated. Bokum Hi, featuring the raw gutbucket voice of Jason Joshua, is the heaviest of the album’s JB’s-type grooves. They Say It’s Christmas Time may be out of season but John Dokes delivers it with zest and sophistication, the lyrics about Brooklyn are in sync with the album’s New York City vibe. Scone vehemently stamps his layered, percussive mark on the boogaloo-ish Brass Tacks. The Q&A between Scone and saxophonist Ian Hendrickson-Smith during the show stopping ballad The Crown Divide is deft and charming.

Then there’s the deep soul of My House Is Small (But I Dream Big), a melancholy song of hard-won hope and togetherness, with the brittle and sagacious voice of Naomi Shelton drifting through the cracks of the back room. If the song is a carriage, the organ of Adam Scone is the horse pulling it to its destination. On the dirty side of the street.

Find As The Screw Turns here.

Check out Scone Cash Players featuring Naomi Shelton with My House Is Small (But I Dream Big) on YouTube here.