Eddie Baccus is the Speedy Gonzales of the Hammond B3 organ. Still, Mr. Baccus keeps up a remarkable clarity of line, as can be heard on his 1963 album on Smash, Feel Real. 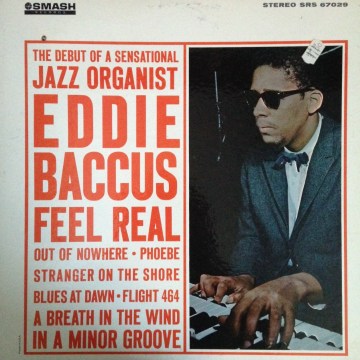 Side A:
Feel Real
Out Of Nowhere
Stranger On The Shore
Blues At Dawn
Side B:
A Breath In The Wind
Flight 464
Phoebe
In A Minor Groove


For a long time now, it has been Eddie Baccus Sr. Until recently, the 81-year old, blind organist performed with his son, saxophonist Eddie Baccus Jr. Baccus was born in Lawnsdale, North Carolina in 1936. Soon after birth, the young Eddie turned blind. He grew up in Columbus and Cleveland, Ohio, where he came under the tutelage of Roland Kirk. Until then, Baccus was a pianist, but he took up the organ whilst in Kirk’s group. The group had a nine-month residency at the 100 Club in Cleveland. When Kirk went to New York to join Charles Mingus, Baccus remained in Ohio with drummer Charles Crosby. Kirk had recommended Baccus to Jack Tracy, label boss of Smash Records. And so Feel Real came about.

The only album by Eddie Baccus as a leader, Feel Real, features a tight-knit, cookin’ trio including guitarist Mose Fowler and drummer George Cook, who alternates with Baccus’s old pal Charles Crosby on a number of tunes. Baccus is a heated cat, functioning somewhat as the proverbial talented teenage organist that underlines the Baptist preacher’s fire-and-brimstone speeches in a church way down south. To be sure, it’s kind of a BOP church in a way. Plenty of greasy sermons are commented upon by quicksilver figures that very likely are grounded in Baccus’s past as a pianist who was influenced by Charlie Parker and Bud Powell. The bravura of Baccus is underlined by impeccable timing on top of the beat. The frenzied ‘more is more’ approach does, however, makes part of the congregation, not least the sinner at the desk of Flophouse Magazine, rather jittery. There’s a limit to stuffing multitudes of notes in a bar.

Fans of good old organ grooves will love Feel Real’s zest, expertise and diverse repertoire. Baccus provides a couple of catchy blues-based tunes that effectively make use of stop time. Feel Real is a delicious ditty, featuring Baccus as a NASCAR driver dangerously close to the boards, his tires practically burnt to pulp. His razor-sharp intro of Flight 464 is a gas. Blues At Dawn is a variation of Charles Brown’s Driftin’ Blues. It’s down-home stuff taken at a leisurely medium tempo, underscored by the in-your-face sound of the Baccus B3. The group puts a good groove into Out Of Nowhere. A lithe touch is added to the album in the guise of Roland Kirk’s A Breath In The Wind, a deconstruction of the traditional theme-solo-theme format that features lovely, breathy flute playing by one Theoshis Tannis. Obviously, Tannis is a pseudonym for Roland Kirk.

Baccus even takes a shot at Acker Bilk’s Stranger On The Shore. May sound like kitsch. But don’t worry, the waves washed plenty of sleaze and dirt to the coast line on this one too.

Listen to Feel Real, Blues At Dawn and A Breath In The Wind on YouTube.