Who knows what Johnny Griffin meant by calling his tune and album Grab This!. It might be jazz slang we’re not familiar with. Sounds positively like the equivalent of Up Yours!. Signifying the front instead of the rear end, to be sure. Regardless, ‘grab this’ is the only possible advice to real jazz customers. The tenor saxophonist’s 1962 Riverside album, coupling him with organist Paul Bryant, is one of the grittiest in his book. 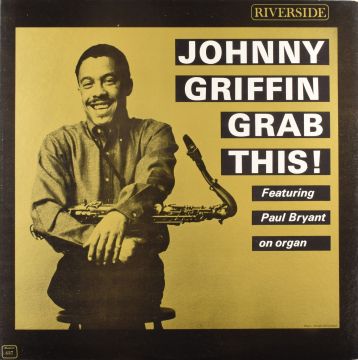 Side A:
Grab This!
63rd Street Theme
Don’t Get Around Much Anymore
Side B:
Offering Time
These Foolish Things
Cherry Float


Label owner Orrin Keepnews liked Johnny Griffin very much. On the advice of Thelonious Monk, he had tried to sign “The Little Giant” in 1956, but Blue Note had been a step ahead. Griffin’s sparse but impressive stint at Blue Note consisted of three albums, A Blowing Session with John Coltrane, Hank Mobley, Lee Morgan, Wynton Kelly, Paul Chambers and Art Blakey being the absolutely epic standout. In 1958, Keepnews finally got hold of Griffin and offered him plenty opportunity to excel, placing him in differing contexts, from quintet to big band, from straightforward repertoire to folk or gospel concepts. (The Kerry Dancers, Big Soul Band) Simultaneously, Griffin recorded a string of tough tenor albums on the Riverside subsidiary label Jazzland with fellow tenorist Eddie “Lockjaw” Davis. As a result of Riverside’s bankruptcy in 1963, Griffin’s stretch with the label came to an end. Griffin, who had started with Lionel Hampton in the 40s, cooperated with Thelonious Monk and Art Blakey in the 50s, recorded prolifically as a leader but, embittered about the underappreciation of mainstream jazz at the expense of free jazz, settled in Europe, where he stayed for the rest of his life, one of the icons of hard bop tenor.

It was hard to compete with Johnny Griffin, monster tenor saxophonist, who really could bop someone in the ground at the breakneckest of tempos, meanwhile keeping clarity of line, double-timing with the hellhound on his trail. But obviously he was not just a technician, but instead a melodist that sincerely interpreted a song. Most of all, he was full of Charlie Parker and full of blues, a lava burst of indelible, wailing notes. Griffin was a lively, entertaining personality on stage, especially later in his career onwards from the 70s, whose relentless bop fests and meaty ballads were of a consistently high level and wildly exciting.

Coming from Chicago, it was natural for Griffin to put groove to good use. There’s no shortage of it on his next to last Riverside session, Grab This!, which also featured organist Paul Bryant, guitarist Joe Pass, bassist Jimmy Bond and drummer Doug Sides, musicians who were working on the West Coast at the time. The album was recorded in Los Angeles and Griffin, veteran of the bands of Joe Morris, T-Bone Walker, Arnett Cobb, spreads an abundance of grease on the bright yellow soccer ball that was hanging above the shoreline of the Pacific Ocean. Likely, Griffin was in L.A. to perform, met a bunch of fine musicians, called Orrin Keepnews, ‘Say Keeps, want me to do a session with these cats? About time for a greasy affair, right!’

No complaints about the blues tunes that Griffin used for the occasion, particularly considering the meaty backing of drummer Doug Sides and the especially responsive accompaniment of organist Paul Bryant. Bryant is exceptional. He’s not just your run-of-the-mill-grinder, but instead accompanies responsively and uses a lot of space in his solos. The B3 sounds gutsy, in-your-face. Moreover, Bryant’s variation of sounds is striking. He contributes a gospel-tinged tune, Offering Time. In it, guitarist Joe Pass, who recorded on quite a number of soul jazz sessions before becoming a big name, and quite expertly and gritty too, quotes Things Ain’t What They Used To Be during his solo. Blues-based tunes are especially attractive breeding grounds for quotes and Paul Bryant had his say as well during Griffin’s flagwaver, Cherry Float, suavely embellishing his Hammond organ tale with a fragment of Thelonious Monk’s Rhythm-A-Ning.

Griffin breathes, quite literally too, life into the ballads Don’t Get Around Much Anymore and These Foolish Things. He’s having fun with the blues, juxtaposing bop clusters with belligerent shouts during his original tunes 63rd Street Theme and Grab This!. Grab This! is especially cool. Actually, it’s a definite ‘up yours’ to safe playing. Griffin’s phrases refreshingly pop out of the changes like the cork out of a champagne bottle, not once but over and over. Jazzy New Year. At the end of the party, Griffin somehow, a bit wobbly from the booze and dizzy from the firecrackers, lands on his feet. Bit of risk taking won’t hurt. Makes it all the more worthwhile. Got enough accountants already. There are no accountants on Grab This!, unless you count Orrin Keepnews, who counted the money and was finished awfully quick, having to file for a bankruptcy together with his associate Bill Grauer soon after. Nothing to be ashamed of. And lest we forget, Keepnews came back doggedly and successfully a couple of years later with Milestone records.