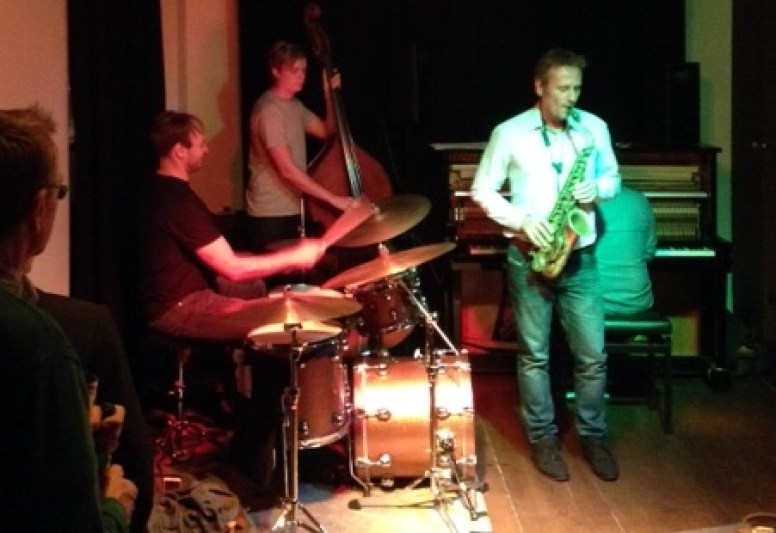 ARI HOENIG QUARTET IN CONCERT – As an old friend from Twin Falls, Idaho always used to say: You can’t become Zappa just by ripping some flesh from a weasel. Meaning, of course, that in music, and this certainly applies for jazz, it is essential to have or find your own voice. Mission accomplished – summa cum laude – for Ari Hoenig. The 44-year old, American drummer, who recorded and performed with, among others, Chris Potter, Mike Stern, Herbie Hancock and Gerry Mulligan, is like a musical sponge. Yet every style Hoenig soaks up comes out Hoenig and 100% jazz, obviously as a consequence of the man’s astounding virtuosity, impeccable taste and striking energy.

So when you’re at a Hoenig performance – on October 3, Hoenig performed with his European quartet consisting of alto saxophonist Gaël Horellou, pianist Ettiene Deconfin and bassist Viktor Nyberg at club Pavlov in The Hague, The Netherlands – you’re bound to be baffled by the hodgepodge of passionate dedication to the roots of Max, Philly Joe, Elvin, Tony, Jack, classic rock drama and avant-leaning tendencies Hoenig provides. The atmosphere is electric, not unlike, you start to imagine, the vibes at The Five Spot several decades ago, when Ed Blackwell spurred on Eric Dolphy and Mal Waldron, and vice versa. Suddenly you’re convinced that Robert Wyatt has a brilliant nephew. And yes, when Hoenig cum suis opt for a relentless, metronomic krautrock beat-section, you feel that one of alt.rock band Wilco’s many interesting assets is incorporated effortlessly into Hoenig’s adventurous jazz conception.

He loves to tackle standards. Hoenig’s melodic drumming in Sonny Rollins’ Pent-Up House, accompanied by bass, is a sound to behold. The quartet’s version also includes breakneck 4/4 swing, fat-bottomed grooves and an old-timey, swing-y beat. Deconstructive beauty. The extremely powerful quartet is sensitive to each other’s needs, on top of its game, flowing smoothly through the complex structures. And joyfully, considering the most winning smiles Deconfin and Nyberg share during their straightforward, unison counterattack of Hoenig’s cross-rhythmic extravaganza of the Hoenig tune I’ll Think About It. The French/Swedish combo also blends well with Hoenig on his vigorous, long-lined ballad Alana, which also boasts exceptional brush-work by the leader.

At regular intervals during the show, there’s an ooh’ or ‘aah’, enthusiastic responses from the audience to a particularly clever or stunning break, roll or solo. Perhaps one or two of the many conservatory students present at the cozy 1st floor of Pavlov. Hoenig is a monster. A good-natured beast deeply involved in his game, full of life and laughter. Stacking rhythm upon rhythm, simultaneously pulling it to the max against the other gentlemen’s differing pulse, simultaneously shifting it with the bombs jazz-minded sixties legends like Ginger Baker or Jon Hiseman threw down, Hoenig’s kinetic performance of his original composition Lines Of Oppression is highly contagious. The skittish, uplifting theme brings to mind both Keith Jarrett’s Spiral Dance and the quixotic jazzy sides of Gong. The piece includes a sweeping pop-classical intermezzo.

It’s the opening tune of the evening and a big bang. The way shows should commence! Hoenig gathers momentum by the minute, alto saxophonist Gaël Horellou throws himself headlong into a tale of incredible force and swiftness, including moans, shouts and furious valve effects in his mind-boggling sax bag. A rare sight to behold, a player who climaxes early yet succeeds to sustain clarity of line, coherence and steam. Horellou’s profusely sweating, happy face regularly turns tomato-red.

The audience occasionally turns red, blue and green, but it’s not from suffocating, instead rather from enchantment. The Ari Hoenig Quartet is something else.