A wide-ranging stunner, pianist Walter Davis Jr.’s debut as a leader in 1959, Davis Cup, deserves its rightful place among the classic hard bop albums on Blue Note at that time. 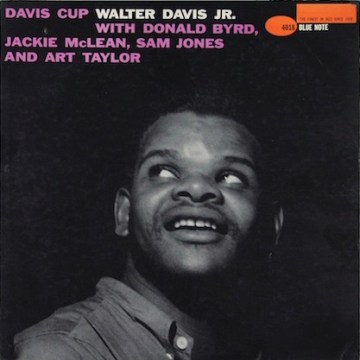 Side A:
’S Make It
Loodle-Lot
Sweetness
Side B:
Rhumba Nhumba
Minor Mind
Millie’s Delight


From the immaculate six Davis-penned compositions, the hi-powered energy, the stellar line-up, the singular style of Walter Davis Jr. and, last but not least, the wicked title, Davis Cup is an allround, pure-bred hard bop package easily taken for granted in the era of classic jazz albums. In 1959, the following albums, among others, were released on Blue Note along Davis Cup: Horace Silver’s Finger Poppin’ and Blowin’ The Blues Away, Sonny Clark’s My Conception, Art Blakey & The Jazz Messenger’s At The Jazz Corner Of The World and Africaine, Donald Byrd’s Byrd In Hand, Kenny Burrell’s On View At The Five Spot and Jackie McLean’s New Soil and Swing Swang Swingin’. Pleasant company.

Not just an innocent bystander either, Mr. Davis. The Richmond, Virginia-born pianist was featured on New Soil, (and, later on, McLean’s avant-leaning Let Freedom Ring) Byrd In Hand and Africaine. Obviously, Blue Note label bosses Alfred Lion and Francis Wolff were convinced of the abilities of Davis, who went as far back as playing alongside and recording with Charlie Parker at the turn of the previous decade and was known as a major interpreter of Bud Powell. By 1959, Walter Davis Jr. had cemented a position as a delicate juggler of traditional and adventurous styles, underlined by his composer’s sense of continuity, off-kilter twists and turns that pleasantly throw you off balance, a strong percussive touch and chubby, dense, driving clusters of chords. In the slipstream of Horace Silver in the late fifties, Davis is concerned not only with gritty yet elaborate compositions, but also with providing extra motives beside the melody line, creating simultaneously complex and easy-flowing tunes in the process.

Great tunes. Most of them are mid-tempo compositions, like ’S Make It (not to be confused with Lee Morgan’s ’S Make It, which was recorded by Art Blakey & The Jazz Messengers in 1964) Loodle-Lot and Minor Mood, alternated with the ballad Sweetness and the uplifting exotica of Rhumba Nhumba. Medium tempo, minor moods, blues inflections, the lone ballad and an Afro-Cuban exercise: a typical hard bop bag. However, Davis passes his exam cum laude, not in the least as a consequence of Art Taylor and Sam Jones’ responsive, propulsive support, the swift, lyrical lines of Donald Byrd and acerbic, suspenceful contributions of Jackie McLean.

In the sixties, Davis dropped out for a while and worked as a (assumedly very skilled!) tailor before returning to the scene with a guest role on Sonny Rollins 1973 album Horn Culture. His second album as a leader was released as late as 1979, the first of a series until his passing in 1990 at the age of 57.