Crisp and alert drumming on Eric Ineke’s latest Challenge release, Let There Be Life, Love And Laughter: Eric Ineke Meets The Tenor Players. The album brings to life performances of the now seventy year old Ineke with legends like Dexter Gordon and Lucky Thompson, and contemporary colleagues like David Liebman and Grant Stewart. 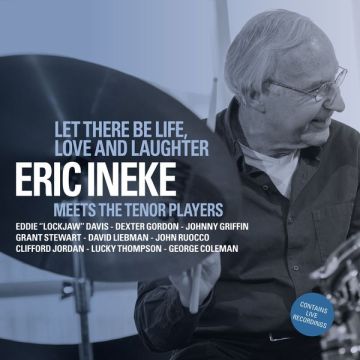 
It is an intriguing and a rewarding project, the combination of so many different styles of tenor playing. In his book co-written with Dave Liebman, The Ultimate Sideman, Ineke, premier European modern jazz drummer who played with numerous legends like Dizzy Gillespie, Hank Mobley and Freddie Hubbard, ruminates on the intrinsic bond between the tenor saxophone and drums: “The tenor saxophone is one of the instruments that is really made for jazz music, much like the trap drums. They are quite similar in that respect. It blends very well with the drums, particularly with the cymbal and with the tom tom sounds.” Ineke swings equally hard with tenorists, altoists or baritone players, yet the conversations of the drummer with Dexter Gordon, Johnny Griffin, et. al. eloquently prove his point. These conversations also are evidence of Ineke’s flexible approach to the manifold ways of phrasing and timing from the classic heroes and contemporary stunners of jazz.

A lot of crackerjack tenorism on Let There Be Life, Love And Laughter. George Coleman, a monster on tenor and perhaps still undervalued, sets fire to the Hothouse in Leiden with Walkin’. A tune that, incidentally, was so influentially performed in 1954 by Coleman’s band leader of 1963/64, Miles Davis, a session that included Lucky Thompson. On this version, Ineke acts accordingly, ‘bombing’ generously and answering Coleman’s staccato, recurring figures equally furiously. Fire and brimstone!

Dexter Gordon’s typically ‘lazy’ but forceful statements on Stablemates, taken from the sought-after LP All Souls: The Rob Agerbeek Trio Featuring Dexter Gordon, are kept in check by Ineke’s steady beat. Gordon wails one of his great solo’s of the seventies. Pushed to the max, another giant of tenor, Johnny Griffin, is flying home at breakneck speed on the bop standard by Denzil Best, Wee. It’s a propulsive high point of the Rein de Graaff Trio, which included bass player Koos Serierse and is marked by high-level bop drumming with a leading role of the ride cymbal. Rein de Graaff’s Bud Powell-influenced solo is ferocious, masterful, the tension is heightened by bold lines up and down the keys. Johnny Griffin is having serious fun. At the end, the Little Giant sardonically and playfully comments on the prolonged Ineke coda: “Shut up! You drummers playin’ so loud. Jazzzzzz music! Where am I, Leeuwarden? Dankjewel.”

On another side of the spectrum Ineke delicately accompanies Eddie “Lockjaw” Davis, whose sensuously masculine, breathy take of Body And Soul is most arresting. There’s the clean, round and honestly emotional tone of Clifford Jordan, who plays his original composition Prayer For The People. Lucky Thompson also possessed a lithe, mesmerizing tone on the tenor saxophone. Thompson, an essential link between swing and bop, is heard on Lady Bird on a radio recording at club B14 in Rotterdam in 1968. 1968… where have all the flowers gone: the period in which the professional career of Eric Ineke, who celebrated his 70th birthday recently at The Bimhuis, really took off.

Also from that venerable venue in Amsterdam stems Ineke’s recording (including regulars from his hard bop outfit Eric Ineke’s JazzXpress, pianist Rob van Bavel and bassist Marius Beets, who also took excellent care of this album’s mixing and mastering) with Grant Stewart. His story of Bye Bye Blackbird is relaxed but driving, motivated by Ineke’s lilting rhythm. At forty-six, the Canadian Stewart is the youngest tenor player on the album. Considering Eric Ineke’s supportive attitude towards young Dutch hard bop guys as well as international students on the Conservatory Of The Hague, where he teaches, it would’ve been the cherry on top if a collaboration with a young lion could’ve been included.

On the title song, Ineke cooperates with long-time collaborator Dave Liebman and John Ruocco. During a rendition of the pretty Kurt Weill composition that alludes to the intrinsic Dixie-feel of early Ornette Coleman tunes, Liebman and Ruocco travel a similar avant-leaning path, Liebman with exuberant tinges, Ruocco more introspective. The beat seems to have time-traveled from Baby Dodds to Ed Blackwell to Eric Ineke. A noteworthy excursion to the woods from the hard bop aficionado, who, lest we forget, periodically traveled to modal landscapes with Rein de Graaff and far-out territory with Free Fair in the mid and late seventies.

Let There Be Life, Love And Laughter is a thoroughly enjoyable reminder of the swing and expertise that Eric Ineke has always brought to his gigs with incoming Americans. And I’m sure it will be a revelation for jazz fans who have heretofore been dependant on hearsay.