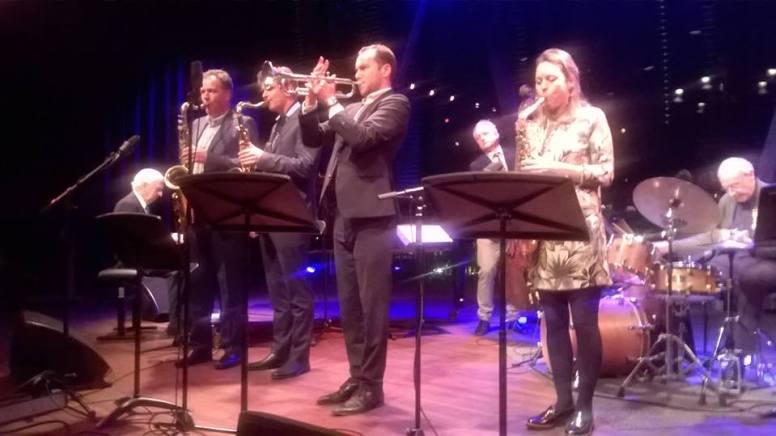 ERIC INEKE – A lack of taste and decency from the officials may have prevented the Ajax stadium being christened Johan Cruijff Stadium a year after the passing of Holland’s soccer genius, they sure know how to treat their jazz luminaries. On his 70th birthday on Saturday, April 1, which was celebrated with a concert at The Bimhuis, drummer Eric Ineke, who during a fulfilling career of almost fifty years cooperated with legends like Dexter Gordon, Johnny Griffin and Dizzy Gillespie, was knighted as Ridder in de Orde van Oranje-Nassau for his outstanding contributions to the Dutch jazz realm by the deputy mayor Simone Kukenheim. An otherwise less formal evening, hosted by Cees Schrama and Frank Jochemsen, was divided into a series of concise sets by Dutch powerhouse line-ups including Tineke Postma, Rein de Graaff, Marius and Peter Beets, driven by Ineke’s trademark propulsive style in the tradition of Elvin Jones and Philly Joe Jones. Ineke’s regular hard bop quintet Eric Ineke’s JazzXpress performed twice and during the second set was supplemented with alto saxophonist Tineke Postma. De Graaff and Ineke, buddies-in-soul since the late sixties, played freely around the beat in standards like How Deep Is The Ocean, tight-knit as usual. Ineke also responded enthusiastically to Postma, answering her adventurous structural improvisations with like-minded, horn-like phrases on snare and tom. Horns-a-plenty: tenor saxophonists Sjoerd Dijkhuizen and Simon Rigter provided mature and tasteful tenor tales. The young trumpeter Gidon Nunes Vaz is a rapidly developing musician with a beautiful tone and a style best likened to forebears as Kenny Dorham. Pianist Peter Beets, just back in town from a concert of Paul McCartney compositions with Roger Kellaway in New York, clearly relishes fiery, Oscar Peterson-type takes on tunes as Con Alma. The trio with Peter Beets also accompanied promising singer and organizer of the show, Jurjen Donkers. While the first set of the JazzXpress focused fluently on Dexter Gordon tunes as Fried Bananas and The Panther, the second set harked back to the glory days of mid-sixties, avant-leaning hard bop that was being made on the Blue Note and Impulse labels. It was an absolute gas, Jarmo Hoogendijk’s Waltz For Woody and Ray Brown’s Lined With A Groove being stunning high points. Pianist Rob van Bavel tapped into his seemingly limitless reservoir of inventive voicings and impressionistic lines. During the final jam on Rhythm-A-Ning, all participants present on stage, Ineke’s hard, alert swing was still in check. The audience was delighted and the knighted 70-year old Ineke was in good spirits.