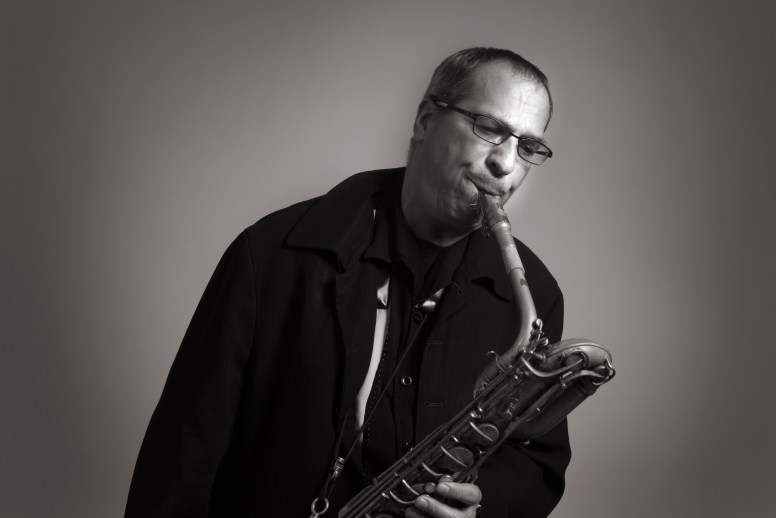 A meeting with baritone saxophonist Gary Smulyan isn’t complete without a mention of Encounter!, the masterpiece of his all-time bari hero, Pepper Adams. “Pepper is the all-round master. And what a sound!”

Like many fellow Americans that are and have been eagerly doing the freedom jazz dance, Smulyan spends a lot of his work time in Europe. Currently, Smulyan is touring The Netherlands with the trio of pianist Rein de Graaff, a series of gigs billed as Chasin’ The Bird. Smulyan, a congenial gentleman with strong hands and fluent talker with a glance that alludes to a romantic rendezvous between sincerity and good humor, explains: “I have been touring with Rein’s trio about every two years for a long time now. I tell you, we’re flying from note one. These guys really know where it’s at. The venues are lovely and Rein isn’t only a great piano player but an extraordinary organiser as well. It’s a warm bath.”

Chasin’ The Bird, one hell of a job. Or, correction, heavenly duty. “I can’t get enough of Charlie Parker. In fact, I’m still awe-struck. Bird’s a daily treat on the menu. Strangely enough, Parker is regularly taken for granted. From talking to musicians I sometimes get the impression that they only scratched the surface of Parker, didn’t look further than the well-known recordings. But there is a wealth of revealing material, like the bootlegs, some of which luckily have come to the surface legally. Lately, I’ve been listening a lot to those amateur recordings Dean Benedetti made of the Bird solos. It’s astonishing! His rhythm, harmony, time, just otherworldly. Sometimes freshmen ask me, ‘what’s the secret, how do you do it?’. Well, there is no secret. Bird is the well you need to drink from. Find your own taste while you’re at it. Lest we forget, of course Bird was influenced significantly by Lester Young, among others, there’s the tradition, there are the bloodlines… However, Bird is The One.”

Starting out in jazz as an alto saxophonist, Smulyan was heavily influenced by Phil Woods, who, it goes without saying, developed a distinctive and brilliant musical personality in the Parker tradition. Born in Bethpage, New York in 1956, growing up in Long Island, the aspiring Smulyan was close to the centre of modern jazz, Manhattan, and as a consequence, Phil Woods. “In the early days, I even dressed like Phil Woods, down to the singular leather cap! At any rate, I played alto until I was twenty-two, hadn’t even touched the baritone. My jazz schooling really gained depth when I acquainted Billy Mitchell, Dave Burns, Joe Dixon, who became my mentors. It’s really important to come across guys that are on a higher level and have more knowledge than you and who, above all, honestly point out your shortcomings. Kind of steer you in directions with integrity, you know. That’s why I’m consciously open minded to youngsters. I’m grateful for meeting my mentors and strive to pass the peas in a worthy manner myself.” 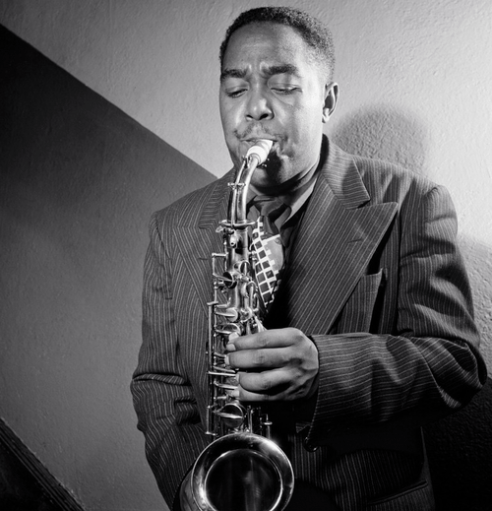 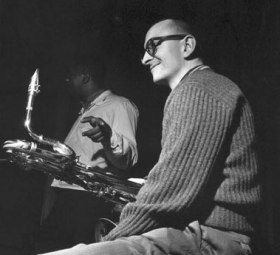 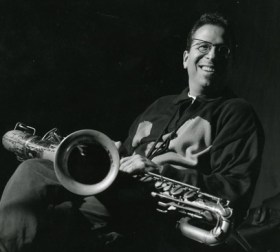 Sitting in with his mentors, and soon, legends like Chet Baker and Lee Konitz, Smulyan and the little horn seemed a perfect pair. Until the big horn came along. In 1978, the phone rang, and the question was if Smulyan would like to play in the big band of Woody Herman. On baritone. “Well, it didn’t take me long to figure out that puzzle. Luckily, I had two weeks to spare. I bought a Yamaha baritone and studied some tunes I knew were in the Herman book. Suddenly, I found myself sitting beside tenor saxophonist Joe Lovano, who became a life-long friend. That phone call was one of those fortuitous moments that sometimes occur in one’s life. Right place, right time. Initially, it was quite unnerving, a risk. But I strongly believe that it’s important to take a risk, grab that opportunity.”

The association with Herman’s Young Thundering Herd was the start of Smulyan’s career as a baritone saxophonist that has been going on for almost forty years. Among many other endeavors, Smulyan played in the Mel Lewis Orchestra, the Vanguard Jazz Orchestra and cooperated with Freddie Hubbard, Dizzy Gillespie, Stan Getz and George Coleman, and records prolifically as a leader. A regular winner of the Downbeat Reader’s and Critic’s Poll and Grammy Awards, Smulyan is the to-go-to baritone saxophonist on the scene today. First it was Pepper, now Gary Smulyan is the all-round master. Ooh, ooh, ooh, what a little phone call can do to you.

“It’s not such a cumbersome instrument as they say. At least, I don’t see any difference with the trombone, tuba, or drums for that matter. It’s in the way that you use it. And how can it be awkward when you do it with love? Furthermore, there are not many baritone players around as opposed to tenor or alto players, so if you’re proficient, there’s a lot of work. The baritone is the underdog. Sometimes I take the horn out of my suitcase and just see those eyes popping out of the head of a spectator! Mulligan is the only baritone saxophonist who is known by the general public. At any rate, if you would’ve told me at age fifteen that I would become a baritone saxophonist, I would’ve said you’re crazy. That’s why I’m still, occasionally, floored by happenings in my life. Such as my cooperation with Tommy Flanagan on my 1991 Homage album of Pepper Adams pieces. Flanagan!”

A number of baritone saxophonists influenced Smulyan, among them the father of the bari, Harry Carney and the modernists Leo Parker and Cecil Payne. However, Smulyan’s main man is Pepper Adams, the little man with the big horn who took the baritone to the next level, displaying the blistering speeds of bebop, rare harmonic ingenuity, a composer’s sense of continuity, agressive rhythm, a bark-like timbre and a huge, imposing sound. “It’s all there on Encounter!, Adams’ 1968 Prestige album with Zoot Sims, Tommy Flanagan, Ron Carter and Elvin Jones. The epithome of Pepper’s art. I’m still enthralled by his sound on that album! Sound reflects the personality, it’s paramount, it’s your voice. And boy, does Pepper have a marvelous voice. Rhythmically, harmonically, his standard of playing is tremendous. Rudy van Gelder’s production is out of sight, very transparant and spacious. Partly straightforward, partly avant-leaning, the vibe is remarkably free. Also because of Elvin Jones, of course. There are a number of challenging tunes, like Punjab, the Joe Henderson tune. Zoot Sims, a more straightforward swinger and a big favorite of mine, really seizes the opportunity. He’s an interesting partner for Pepper. The tunes are short, I like that. Short is good! Although I like to stretch out, a maximum of allotted solo time isn’t necessarily a disadvantage. Enough time in short tunes for harmony as well. It stimulates creativity. Look at Duke Ellington, the enormous wealth of stuff that he put in those 3 or 4 minute tunes. I also love the Pepper Adams album Ephemera, with Mel Lewis, George Mraz and Roland Hanna, for many of the same reasons. 10 To 4 At The Five Spot? Great album. But that piano! Horribly out of tune. It’s hard to listen to. Poor Bobby Timmons.” 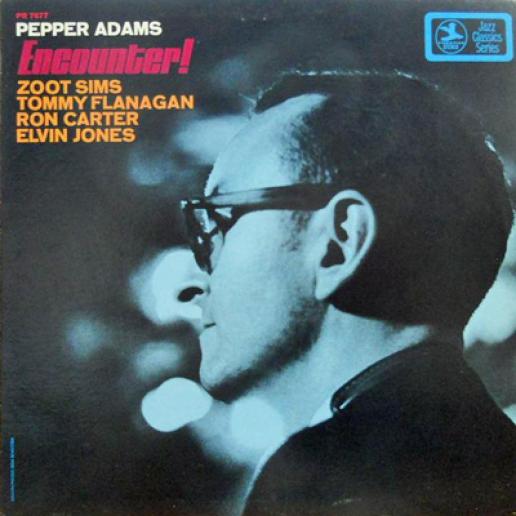 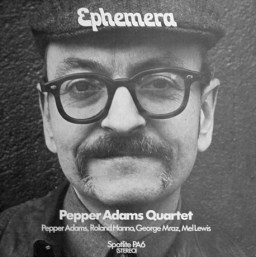 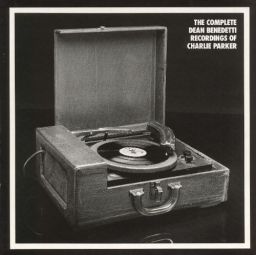 A lot of Pepper and a lot of pepper, in the guise of a singular type of controlled fury, is evident in the playing of Gary Smulyan. Furthermore, a distinctive voice with his own brand of harmonic finesse, a strong beat, acute wit and a striking penchant for telling a coherent tale rings through. “I’m concerned with the architecture of my lines, with secondary motives, for instance. The kind of structural improvisation that runs through the career of Sonny Rollins. I’m not consciously aware of it, but these things probably lurk somewhere in the back of my mind, while I’m hoping to find beautiful lines. Beautiful lines and beautiful sound is what it’s all about.”

Does middle-to-old age matures the beautiful products of a jazz life, like it does a Bordeaux wine? And does it peel off some of the rough edges? Evidently, there’s so much wisdom in the playing of elders like Charles McPherson, Barry Harris, Jimmy Heath. Smulyan chuckles: “Hey, I’m only sixty! Though I feel like I’m fifty-nine. Well, I’m not the same person I was like the twenty year old kid, or the forty year old man. What you go through in music and life is reflected in one’s musical voice, I’m not an exception. However, some sixty year olds might tend to take it easy. Not me. Regardless of my shifting approaches, I still love to play fast!”

Maybe it’s the soul patch sitting, Zen-masterly, under Smulyan’s lips. Or the composed stroll of Smulyan before and after the interview, bringing him to the side walls and show cases of the hotel. Casually dressed in jeans and a sweater, hands folded behind his back, Smulyan bows slightly forward like a collector of Louis XI grandfather clocks on an antique fair, or a monk peeking over the shoulder of a novice at work on a weighty book in the athenaeum. Keen-eyed, curious. Maybe it’s just a hunch that Smulyan’s birds are flyin’ high and dry. Fire down below in the heart, yet a heart at peace with beating evenly. “I’m very pleased about the way things turned out and how I’m doing now.” Chuckling: “The phone keeps ringing and I sometimes succeed in coaxing producers into projects. Most of all, I’m glad to live my life in the jazz realm. Essentially, jazz is a social affair. Nowadays, people have turned inwards more and more, individualism is overbearing. But jazz is communication. From the pals I visited to play and discuss records with day and night as a young aficionado, to the colleagues and friends in the studio and on stage, it’s about doing things together. Until recently, I teached music college students with developmental disabilities at Berkshire Hills. Their accomplishments are amazing. Jazz is a great tool, you know. It’s refreshing to see the bigger picture.”

Gary Smulyan is the most sought-after baritone saxophonist in jazz today. A five-time winner of the Downbeat Critic’s and Reader’s Poll and a six-time winner of the Grammy Award, Smulyan has built a sizable and diverse resume as a leading recording artist and been a long-serving member of The Mel Lewis Orchestra, Mingus Big Band, Dave Holland Octet and Big Band and the Vanguard Jazz Orchestra, as well as the bands of soul and blues giants Ray Charles and B.B. King. Smulyan has cooperated with, among others, Gerald Wilson, Tommy Flanagan, Jimmy Knepper, George Coleman, Joe Lovano, Tom Harrell, Bob Belden, Christian McBride and Mike LeDonne. Smulyan is a faculty member at Amherst College, Massachusetts and teaches at Manhattan School Of Music, NYC.